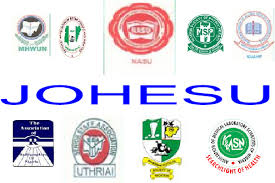 The Federal Government says it is surprised that many of the Health Workers Unions operating under the joint group, the Joint Health Sector Unions (JOHESU) embarked on another round of nationwide strike despite government’s demonstrable commitment to the implementation of the agreement reached with it since their last strike of 20th September 2017.

A statement from the Press Directorate of the Federal Ministry of Labour and Employment said, “at a period the Federal Government is faithfully managing lean resources to ensure industrial harmony in all sectors, a measure of patriotism is expected of all labour unions to enable government have an equable social and very good labour milieu in which workers could be assured of security of employment.”

“It is on record that government has met almost all the demands of these unions on issues such as the payment of promotion arrears, salary shortfalls among others as per the agreement reached on September 30th 2017.”

“The Federal Government therefore wishes to appeal to JOHESU to reconsider its position in view of the immeasurable consequences of its action on sick patients in hospitals across the nation.”

According to the statement, “while the Federal Government restates its commitment to the implementation of the Terms of Settlement reached with JOHESU, it shall not however fail in its sacred responsibility of protecting the lives of the numerous patients in all public health institutions where this group of health workers have unjustifiably withdrawn their services”.

“If this group of health workers persist on continuing this strike, Government will be forced to invoke the provisions of the relevant labour laws, especially Section 43 of the Trade Dispute Act, Cap.T8, Laws of the Federation of Nigeria (LFN) 2004 as well as the International Labour Organisation (ILO) principles concerning employers rights over strikes in essential services sector,” the statement concluded.