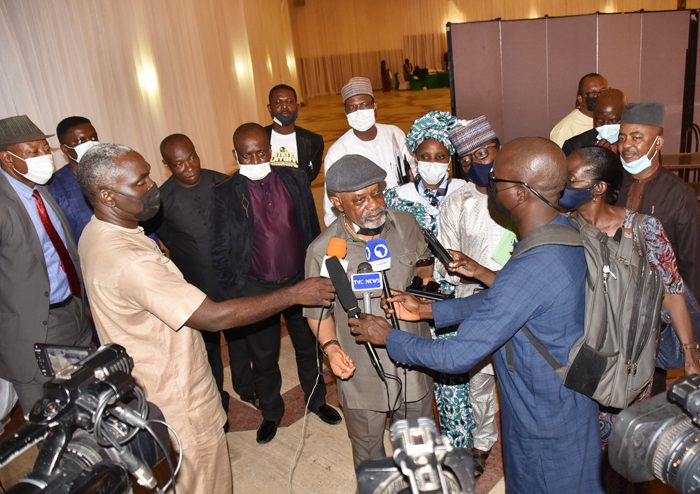 The Federal Government says it will take the final decision on the new hazard allowance for health workers.

Ngige explained that the government side allowed enough time for the two big bodies of the health unions and professional-the Nigerian Medical Association and the Joint Health Sector Unions (JOHESU)-to harmonise their different positions on the hazard allowance, but they were not able to do so.

Consequently, the Minister said the matter would be taken back to the National Salaries, Wages and Incomes Commission (NSWIC) and the Presidential Committee on Salaries to decide on the new hazard allowance for health professionals and workers.

According to him, the Government was treading cautiously in order not to be seen as trying to stampede the health workers since the matter concerns money.

He said, “We would have separated them into JOHESU and NMA but that will give us much problem in terms of the implementation of whatever we agree on.

“We have given them that time to see if they can meet and harmonise their positions, but they were not able to do so. We are adjourning this meeting sine die for the government side to look at those two positions to see whether we can do a middle of the road within our organ, the NSIWC, which by its mandate, is the government organ that fixes salaries, wages, allowances and remuneration.”

Ngige recalled that the Federal Government earlier offered the health workers 300 percent increment on hazard allowances, which came to a quantum amount of N37.5 billion.

He said they were trying to work within that realm of N37.5 billion, following the inability of the unions to harmonise their different positions.

“It is a teething problem because everybody has Collective Bargaining Agreements (CBAs) and we are now renegotiating the CBAs. There are CBA’s in 2006, 2009, 2013 and even court pronouncements by the National Industrial Court, especially on work value and equal pay. These are things we will put in a basket and decide.”

Regarding the trade dispute notices issued to the Federal Government by the National Association of Resident Doctors and JOHESU, Ngige said he has directed them to withdraw the strike notices immediately.

“JOHESU gave 15-day ultimatum with effect from June 28. NARD gave 28-day ultimatum from when the day they had their NEC. Those things are arm twisting and I told them that they must withdraw them because the issues they are bringing in here are tangential issues. They have nothing to do with this discussion here on fixing a new hazard allowance for health professionals and workers.”

Others from the government side at the meeting included the Minister of Health, Dr Osagie Enahire, Ministers of State, Clems Agba (Finance Budget and Planning) and Olorunimbe Mamora (Health), Permanent Secretary, Federal Ministry of Health, Abdulaziz Abdulahi and his Labour and Employment counterpart, Peter Yerima Tarfa