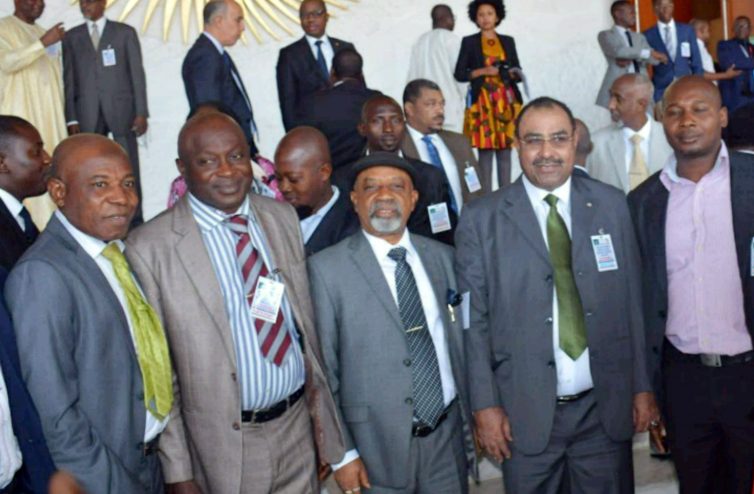 The Economic Recovery and Growth Plan of the Buhari administration got a thumbs-up over the weekend in Addis Ababa, Ethiopia from the African Ministers of labour, Employment and Social Affairs just as they hailed the efforts of the Minister of Labour and Employment, Sen. Chris Ngige at championing the cause of the continent at the Governing Board of the International Labour organization (ILO) since his election in 2017.

The Ministers who gathered for the 3rd Biannual Special Technical Committee on Social Development, Labour and Employment under the auspices of the African Union Commission deliberated on the theme, “Poverty Eradication Through Strategic Investments at National and Regional Levels Towards Social Development, Labour and Employment in Africa”, a subject aligned to the “Africa Agenda 2063 for Prosperity,” already adopted by the Heads of State and Government of the African Union.

Speaking on the theme of the conference as the lead discussant in a paper entitled, “The Efforts of the Nigerian Government Towards the Eradication of Poverty In Nigeria, the Minister of Labour and Employment, Sen. Chris Ngige told the gathering that the economic development agenda of the Buhari administration was tailored towards a concurrent growth of the three-tier federal structures of national, states and local governments in line with the diversity of the nation. The session held between April 1 – Friday, April 6, 2019.

He said the battered economy which the administration met in 2015, slipped into recession in the first and second quarter of 2016, prompting an aggressive economic recovery plan with big emphasis on agriculture and food security.

Said the Minister, “the effects were dramatic. We boosted agriculture and raised the capacity of the nation to feed herself, to the extent that importation of rice for example, dropped by 95%. The same goes for sorghum. This decisive inward look was pivoted on the elastic efforts of government which the Central Bank of Nigeria piloted through the Anchor Borrowers Programme in agriculture.”

On social investments, Ngige said the Home Grown School Feeding Programme has been complementing the free education policy at the primary and junior secondary school levels while stemming the incidence of school dropout which he identified as precursor to child labour. The programme he added has captured about N10 million school children in 25 states of the federation.

Identifying poverty, disease and ignorance as an evil triad that must be fought together, he further gave insight into other social investment programmes such as the N-Power under which the Federal Government has employed 500,000 graduates, the N-Build where 50,000 are engaged, the N-Agro, N-Knowledge, N-Health, and N-Build where hundreds of thousands are also employed.

He also informed the gathering of the Government Enterprises and Empowerment Programme which makes interest-free loans available to small businesses as well as the National Cash Transfer programme (Conditional and Unconditional) to over 1million vulnerable and poor Nigerians, besides the thousands already benefitting from similar programmes by the National Directorate of Employment (NDE)

According to the minister, the Economic Recovery and Growth Plan would have been impossible without the anti-corruption measures such as the Treasury Single Account (TSA) and the whistle blowing policy which government put in place, thus, shutting down leakages and easing the recovery of stolen funds as well as the efforts of the anti-corruption agencies primed for zero-corruption agenda of the government.

Ngige summarized that the efforts of the Buhari administration in the last four years has charted a new course for  Nigeria with the results of that giant strides made manifest  in core sectors of agriculture, anti-corruption , employment generation, infrastructural development and war on insurgency . He warned, “Africa will remain the hewers of wood and fetchers of water, (quoting late Emperor Hallie Selassie of Ethiopia) if drastic measures are not taken by the leaders to fiercely tackle myriads of teething underdevelopment scourge assailing the continent.”

Similarly, a co-discussant and the Chairperson of Business Africa, Mrs. Jackline Mugo called for a common front to solve Africa’s numerous challenges. She also pushed for a change in Africa’s social dialogue as it relates to labour and employment so as to fully tap the full benefits of the African population, which she termed her wealth. Mugo further said Africa can leapfrog from its present commodity dependency if each of the fifty-four countries is able to concentrate on the production of a single product and achieve an optimal international competitive advantage. “You can imagine what it means to have over fifty products from Africa,” arguing it was the route the Asians took.

In another move, the Ministers have nominated Nigeria as one of the Titulars for Africa in the Governning Board of the ILO. Nigeria emerged from West Africa due to her performance since 2017 when Africa put her forward as a Deputy Titular. The Ministers further took particular note of the leading voice which Nigeria’s Minister of Labour and Employment has given to Africa, the very fact that made the ILO elevate him to head government side of the Tripartite even as a Deputy.