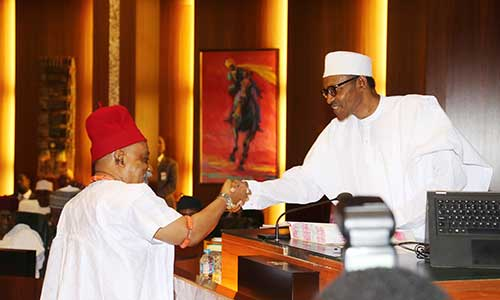 President Muhammadu Buhari last Saturday, 9th February 2019 in Lagos, reassured Nigerian workers in the public and private sectors that he would continue to stand firm with them on the implementation of New Minimum Wage just as he showered praises on the Hon. Minister of Labour and Employment, Sen. Chris Ngige, describing him as very competent and efficient.

The President gave the assurance while addressing the crème of the Lagos Business  Community which included the Organized Private Sector – Manufacturers Association of Nigeria (MAN), Nigerian Association of Chambers  of Commerce, Industry, Mines and Agriculture(NACCIMA), Nigerian Association of Small and Medium Enterprises,  Nigerian Employers Consultative Association (NECA), captains of industries and  financial experts at the State House Marina, Lagos  before proceeding to the venue of the  APC rally.

The President who read a prepared speech stunned his audience when he turned down the usual standing ovation, asking them to rather sit down and hear another story he had to tell about the National Minimum Wage.

Revealing that he has been in support of the New Minimum Wage right from the start because of the prevailing inflationary rate and the rising cost of living since the last Minimum Wage came to effect in 2011, he said he however had little reservation which an Hausa folklore would best express. According to the President, though he is not Hausa, rather a mixture of Fulani by father and Kanuri by mother, the Daura where he was born and grew up was a pure Hausa settlement.

The folklore, the President went on is about a certain mentally deranged Hausa woman who went to the bush to fetch firewood. The woman after tying a load of firewood discovered she would not be able to lift it, yet certain passersby urged her to gather more firewood since she had so many people to feed. The woman paid heed and gathered even more firewood and ended up not being able to either lift her initial load of firewood or the later additions.

He recalled that many states as well as private sectors could not pay the existing Minimum Wage hence prompting the Federal Government to give bailout to some states. He therefore appealed for the commitment of all stakeholders to ensure the smooth implementation of the new wage without retrenchment and its consequent social disequilibrium.

The President particularly commended the Minister of Labour and Employment , Sen. Chris Ngige whom he described as “a competent, effective and energetic Minister,” midwifing negotiations for almost two years and offering him useful advice as well as properly conveying and advising the tripartite members on government position.

FG ADVOCATES PARTICIPATION OF ALL STAKEHOLDERS IN PROMOTING SAFETY, HEALTH AT WORK