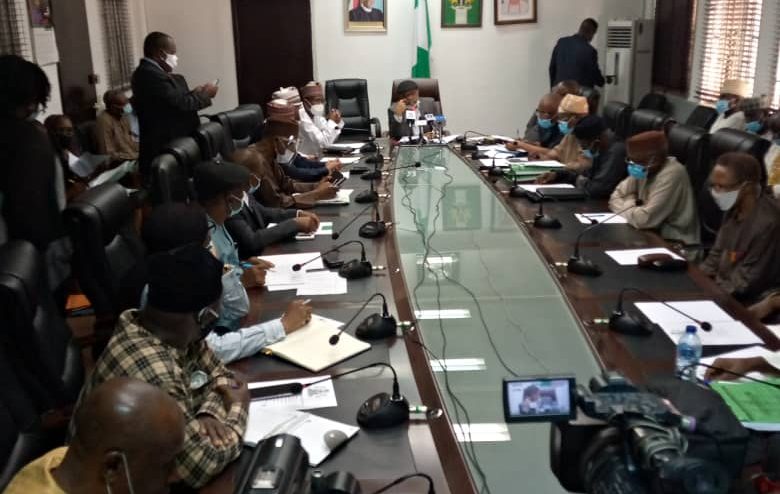 The meeting was convened following the 14 days warning strike declared by the Non-Academic Staff Union of Educational and Associated Institutions (NASU) and Senior Staff Association of Nigerian Universities (SSANU) on Monday 5th October, 2020 because of the alleged failure of the Federal Government (FG) to address fully the following issues:

a). Inconsistencies in IPPIS payments

b). Non-Payment of Earned Allowances (EA)

d). Delay in renegotiation of FGN/NASU and SSANU 2009 Agreements.

2. The meeting deliberated exhaustively on the issues and concluded as follows:

i)  Inconsistencies in IPPIS Payments:

It was resolved that a Five man Committee should be set up to holistically look into the complaints on IPPIS by the Unions with a view to harmonizing its activities and operations.  IPPIS is to involve the Unions and identify those staffs that have been captured but have not being receiving salaries and pay them. The Committee is to identify those Unions whose check off dues have been deducted but not remitted and pay them. To facilitate this, Unions are to forward necessary data to IPPIS. On the issue of welfare, the Unions are to submit necessary document to assist IPPIS make deductions on or before Friday, 23rd of October, 2020. The committee is given two weeks to conclude its assignment. The Committee consists of:

ii)  Non-Payment of Earned Allowances (EA):     The meeting resolved that the N30 billion (Thirty billion) naira, earlier agreed with the Academic Staff Union of Universities (ASUU) is to include all the Unions in the University Sector namely, National Association of Academic Technologist (NAAT), NASU, and SSANU, and all the Unions are to work with the AGF, NUC and Ministry of Education to achieve that by the end of December, 2020

iii) Non-Payment of Arrears of Minimum Wage: The Office of the Accountant General of the Federation (AGF) is to compute arrears from April 2019 – January 2020 and forward to the FME to process it through the Ministry of Finance for payment. A timeline of two weeks was given.

v) Non-Payment of Retirement Benefits of Outgone Members: The AGF, Integrated Payroll and Personnel Information System (IPPIS), Office of the Head of the Civil Service of the Federation (OHCSF) and the Pension Commisison (PENCOM) are to make enquires on this and update the meeting in two weeks. The Universities are to forward the death benefit claims for members that died before March 2020 through the Federal Ministry of Education to the OHCSF for processing.

vi) Teaching Staff Usurping Non-Teaching Units in Clear Violation of Condition of Service and Establishment Procedures: The Unions are to write to the National Universities Commission (NUC)on this and the NUC is to act on the letter within two weeks

vii) Neglect and Poor Funding of State Universities: It was agreed that the NUC Act would be amended in order to strengthen its regulatory capacity.  It was also agreed that the Unions will work with NUC on this and involve the relevant Committee of the National Assembly (NASS).

viii) Non-Constitution of Visitation Panels for Universities: The meeting was informed that the Visitation panels to Federal Universities have been approved by Mr. President, but they have not been gazetted. The Federal Ministry of Education is to ensure gazeting within two weeks (29th October, 2020). The meeting agreed that the Panel will be inaugurated latest by the end of November, 2020 and the Panel will have a 4 – 6 weeks mandate to finish its work by 31st December, 2020 subject to the gazetting and opening of universities and submit two reports per University covering 5 year periods of 2011 – 2015 and 2016 – 2020.