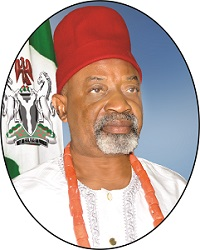 The Federal Government has advised workers especially those in the National Population Commission, Lottery Commission and Parastatals in the Federal Ministry of Science and Technology to engage social dialogue in resolving industrial disputes as self-help such as lock-out of duly appointed officers and picketing are unconstitutional and an affront to the constitutional powers of the President who made such appointments.

The Minister of Labour and Employment, Sen. Chris Ngige made the remark in reaction to the recent spates of trade disputes between workers and their employers especially in the Public Service of the Federation regarding issues of appointments, promotions, administrative postings, and discipline.

According the statement, “Section 169 of this same Constitution created the Public! Civil Service of the Federation, while Section 170 allowed Mr. President to delegate functions to any Member of the Civil /Public Service, and Section171 gave him powers to appoint persons to hold offices in the actualization of the contents of the two previous sections.”

“ Therefore, the recent trade disputes in Government Ministries, Departments and Agencies (MDAs) where workers have embarked on illegal lockouts of officers duly appointed by Mr. President as it happened in the National Population Commission (NPC), and the picketing in some Agencies and Ministries, are clear violations of the constitutional powers of Mr. President as Chief Executive and Appointing Authority.”

“The same goes for establishments where workers have threatened forceful ejection, removal of Chief Executives and Permanent Secretaries over promotion, discipline, administrative postings, and even lawful employment of staff.”

“The statement added that section 40 of the 1999 Constitution, permits persons to assemble freely and associate with other persons to the extent of forming Trade Unions or Political Parties. Hence, Trade Unions are creations of the Constitution which also permits workers who do NOT want to belong to Unions to exercise that right – Freedom of Association – while their employers also enjoy theirs too as Employers’ Associations. These rights extend to workers and employers in the Public and Private Sectors.”

The Minister therefore warns that Employers and Employees have rights imbued in the same Constitution which is the Supreme Law of the Land; and other laws/Acts flow out of this Constitution.

“Accordingly, an employer cannot dictate to workers how to run their Trade Unions, while the workers/Trade Unions have no right to blackmail or arm twist their employers on who to appoint, employ or when to appoint or employ. To so do, would go against the fundamental principles and rights at work enunciated by the International Labour Organisation (ILO). Such illicit industrial actions will not be condoned by the Government.

The statement further advised workers and Trade Unions who have grievances to channel such to the relevant authorities including but not limited to Federal Ministry of Labour and Employment in order to avoid unnecessary politicization at a time scoring cheap political points has become the order of the day .